Over the past 3 months Southwest Exploration (SwExp) has been excited to be the first company to test and evaluate the new wireline NMR logging tools for groundwater applications. With the help of SwExp, a prototype version of the 3.5” wireline probe, (JPX350 and JPX525) were run successfully in July 2016 on two separate wells in Arizona. In addition, a team of engineers from our company and Vista Clara’s completed another successful operation running the JP350 and JP525 probes in a third well in rural Nevada in September. (see picture of JPX525 probe). 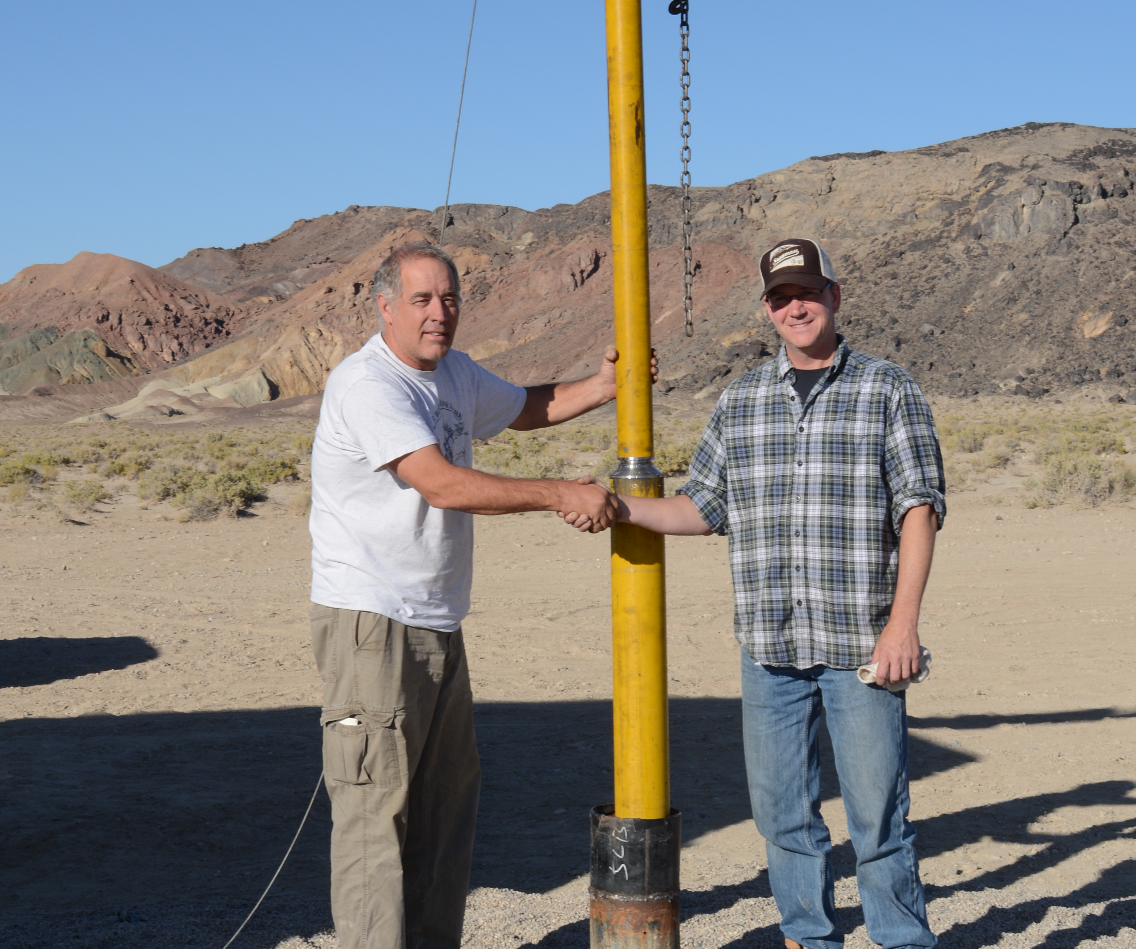 What does it do? The Nuclear Magnetic Resonance or NMR logging tool directly detects the presence and quantity of hydrogen (and by association, groundwater and hydrocarbons) in the formation fluids independent of lithology utilizing a complex phenomenon known as pulsed proton nuclear magnetic resonance (NMR). This technology has been used for years on a larger scale in oil field applications. In 2010, Vista Clara (www.vista-clara.com) developed their Javelin logging system based on oilfield designs, but focusing on smaller diameter tools that can still see far out into the formation. The original Javelin system is a standalone system using a dedicated custom cable to reach depths of about 350m. SwExp has supported Vista Clara in testing of a new digital version of the Javelin system that operates on conventional wireline to greater depths and in the larger holes common to water well applications. Most recently, Vista Clara has developed two new versions of their Javelin probes, the JPX350 and the JPX525 probes, which will allow NMR logging at much deeper depths to up to 1000m.

How does it work? NMR is a phenomenon which occurs when the nuclei of certain atoms are immersed in a static magnetic field and exposed to a second oscillating magnetic field. Nuclei of atoms with an odd number of protons or neutrons such as hydrogen with one proton, have an NMR response. The hydrogen atoms behave like little bar magnets and will align preferably with the background field, in the resonance frequency. This allows the hydrogen protons to be manipulated such that thin discrete cylindrical shells can be measured around the logging probe. The NMR logging probe contains large permanent magnets to align the hydrogen protons and an antenna to transmit the radio-frequency (RF) signals to tip and manipulate the hydrogen protons and to measure the resulting NMR.

Large permanent magnets in the probe create a magnetic field that preferentially orients the hydrogen protons. Polarization is not instantaneous—it grows with a time constant, which is called the longitudinal relaxation time, denoted as T1. The hydrogen is then manipulated through a transmitted radio-frequency (RF) pulse to impose an oscillating magnetic field. This causes a change in the orientation of the hydrogen protons. The spinning protons begin to lose energy as the imposed magnetization, M0, decays and the protons fall out of alignment, back to their original orientation. The decay behavior of the signal over time, which is summarized by the transverse decay-time (T2) distribution, conveys more detailed information about the pore environment. A series of EM pulses are used to measure the activity the hydrogen atoms as they return to the equilibrium state. By emitting a series of radio-frequency pulses and recording the returning signal, Javelin measures the NMR response of groundwater in the sensitive zone, much like an MRI scanner measures the NMR response of tissues in the body. The characteristics of the measured NMR signal reflect the quantity of groundwater, as well as the hydrogeologic properties at a given depth. Specifically, the total amplitude of the signal directly and unambiguously indicates the total amount of groundwater. Generally, water in low-permeability silts and clays exhibits short T2, while water in high-permeability sands and gravels exhibits long T2.

NMR logging tools, like MRI medical scanners, are very sophisticated instruments. The NMR measurements respond to the presence of hydrogen protons in the formation fluid independent of lithology. Because these protons primarily occur in pore fluids, NMR effectively responds to the volume, composition, viscosity, and distribution of these fluids independent upon lithology. The T1 relaxation time responds to total porosity and viscosity of the fluid and is used to distinguish hydrocarbons from water. The T2 distribution responds to the total porosity as wells as the distribution of pore size and the fluid type. In ground water applications, the T2 distribution is usually sufficient to measure total porosity and distinguish between mobile water and bound irreducible water. The basis of this distribution is then used to model and estimate permeability and transmissivity of the formations (see picture below). 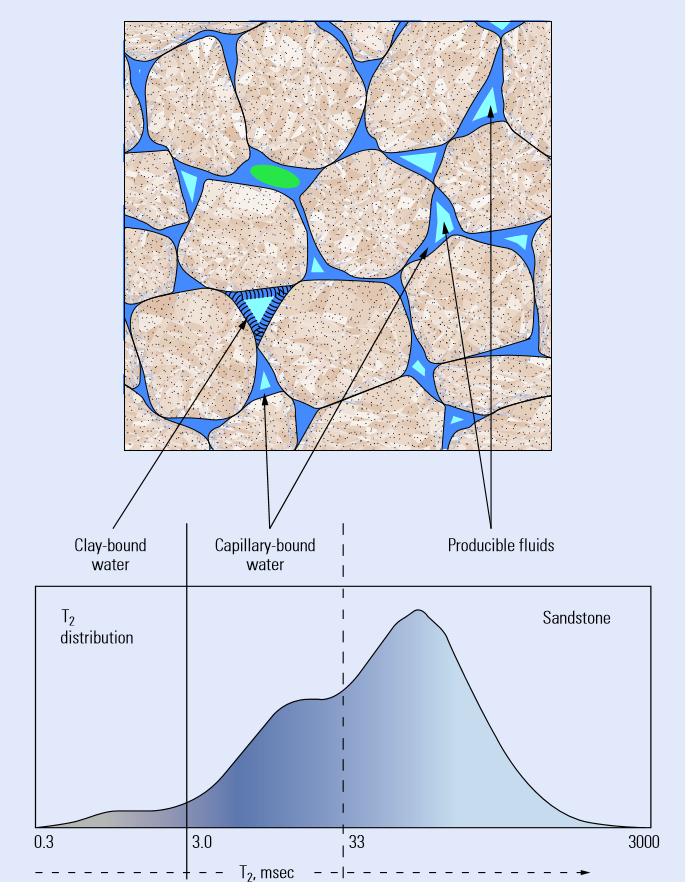 Figure showing the T2 distribution curve and the determination of bound and producible or movable fluids. 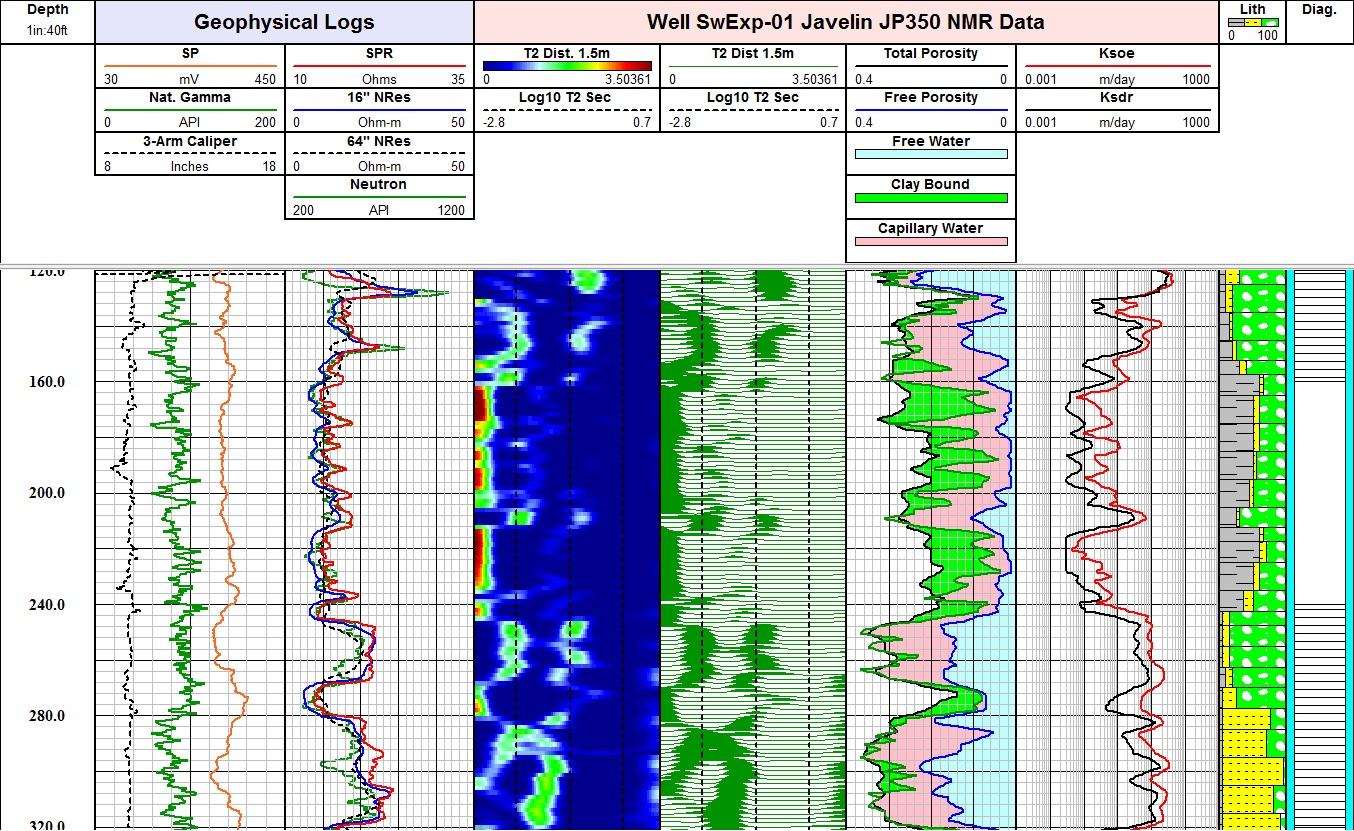 Figure showing the E-Logs along with the distribution of bound water (clay-bound and capillary or irreducible water) and free or mobile water with depth along with an estimate of permeability from several models from the JP350 NMR probe in a well in Arizona.

In short, the NMR tool is able to directly measure porosity, water content (bound vs. mobile), and sensitivity to pore size, as well as give an estimation of permeability and transmissivity. The new tool has an investigation diameter greater than 20 inches, and is able to detect the permeability, water content, etc. beyond the zone that has been disturbed by the drilling process. The applications of this data to the environmental, hydrological, and mining industries are limitless! We look forward to the continued collaboration with Vista Clara and building the foundation for NMR in the Western U.S. Please feel free to contact Southwest Exploration to learn more about this new technology!